Survivor unites others in fight against lung cancer 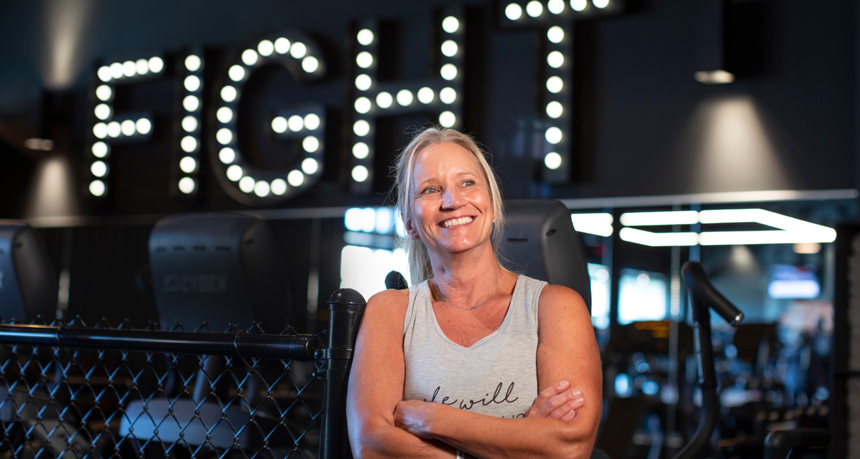 At 55, Lindi Campbell is a self-professed cardio queen.

Her level of fitness is more impressive when you learn that Campbell is missing more than a third of her lung capacity.

Two years ago, she underwent surgery to remove a growth in her right lung. She woke up to sobering news: Despite having never smoked, she had officially become a lung cancer survivor.

Years before she came to the UK Markey Cancer Center, Campbell went to her primary care physician after experiencing chest pains and clamminess in her hands.

After her doctor ordered X-rays, which showed “a shadow,” Campbell sought out a pulmonologist to define the growth.

“It was two years and four months of scans, second opinions, third opinions and even infectious disease doctors,” she said.

Her biopsies all came back negative for lung cancer. But because the spot continued to grow, she went in for surgery, which resulted in her cancer diagnosis and caused the decline in lung capacity.

After her procedure, Campbell transferred her care to Markey, where her case is closely monitored by medical oncologist Dr. Susanne Arnold and thoracic surgeon Dr. Jordan Miller.

“Every cancer patient is different in terms of what they want out of a doctor, and to me, that relationship was important,” Campbell said. “It’s a real relationship built on truth, trust and my best interest.”

The ins and outs of lung cancer

Lung cancer wasn’t something Campbell ever worried about, but after her recovery, she educated herself on the disease.

When detected early, as it was in Campbell’s case, lung cancer is much more treatable. In Kentucky, only 18 percent of lung cancer cases are diagnosed at an early stage.

Because lung tumors can grow very large before they cause symptoms – which can be mistaken for less serious health problems – most people aren’t diagnosed until the cancer is advanced. As the leading cause of lung cancer, smoking is linked to up to 90 percent of deaths from the disease. Radon, a colorless, odorless radioactive gas that occurs naturally in the soil, is the second-leading cause. Campbell never smoked but grew up around secondhand smoke and believes she may have been exposed to radon.

A search for fellow survivors

While she was able to gather medical and statistical information on lung cancer, Campbell noticed something lacking: a community.

Because so many lung cancer diagnoses are linked to smoking, Campbell says the stigma of the disease prevents many people from sharing their stories or reaching out for help.

“I thought, ‘What could I do to use my energy and my story to raise money and awareness?’” she said. “Nobody wants to be the face of lung cancer. But if I’m not going to take this opportunity, who is?”

Forming a community of her own

“It’s up to us to be our own health advocate,” Campbell said. “The more awareness that is out there, the more primary care physicians and pulmonologists will see patient’s symptoms as a possible sign of early stages of lung cancer, even if that person never smoked.”

The UK Lung Cancer Screening Program is available for those who might be at high risk for lung cancer, including current and former smokers. For those whose risk is small or unknown, Campbell emphasizes the need to know your own body and seek medical help if something feels off.

Campbell’s personal journey is still in progress. She worked hard to restore her level of fitness and has returned to her favorite fast-paced workouts. She had hoped to make it to the five-year survival mark with clean scans and no further treatment. Unfortunately, a CT scan in July showed a few spots in her other lung.

Luckily, her most recent visit with Arnold and Miller provided some positive news – her scans showed no new growth of the nodules in her lung. It’s a win she’ll take for now. And in the meantime, she’s got a community to build and grow.

“Even if you start something, and you’re the only person, it’s like the quote from the movie Field of Dreams: If you build it, they will come.”