The Markey Difference Maker award recognizes the above-and-beyond dedication and talent of those who go about the business of treating cancer patients, finding efficiencies in business procedures, improving working conditions, and, generally, making life easier for everyone associated with Markey: patients, caregivers, families, providers, administrators and staff.

Of those eight quarterly recipients, two of them (one from each category) will be receive the “Dr. Lewis Kelly Markey Difference Maker of the Year” award during the annual Markey Cancer Center Research Day.

The Dr. Lewis Kelly Markey Difference Maker of the Year award is given in honor of Lewis Kelly, PhD, who worked more than 25 years to bring the Markey Cancer Center to prominence. Dr. Kelly’s missionary spirit and willingness to help out, no matter how large or small the task, exemplify the qualities of those nominated for this award. 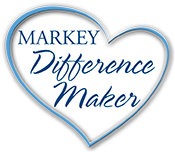