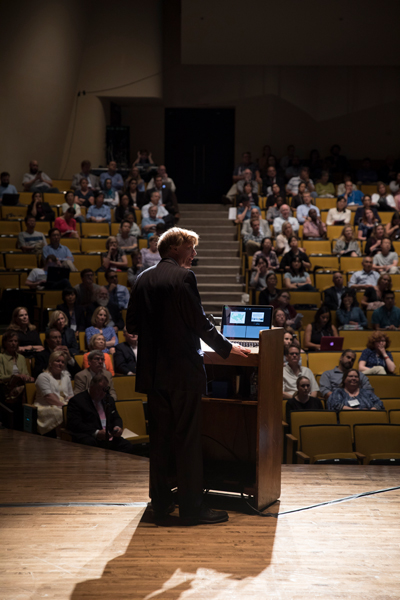 Over the past decade, this event has grown and expanded its reach by finding new voices across campus each year to share the importance and future of cancer research. MCCRD has now grown into a banner annual event, and even in its humble beginnings, it was rooted in the goal of encouraging collaboration. The evolution of Research Day In 2007, an earlier version of the event was held in the Biomedical Biological Sciences Research Building atrium. The event hosted 64 research posters that year, all held on easels. The early days were more informal and originally designed as an opportunity for simple networking around research.

When Dr. Mark Evers arrived as the UK Markey Cancer Center director in 2009, he saw great potential in the event. He hired Cancer Education Liaison Terry Keys to coordinate education conferences and events throughout the year at Markey; and, among the highest priorities, was to reimagine MCCRD with Evers’ vision – a task that Keys took to heart with Dr. Kathy O’Connor, associate director of cancer education and mentoring and also the scientific director of MCCRD.

In 2010, the event moved to the Singletary Center, which offers more space and an auditorium for presentations, including two MCCRD highlights: the Susan B. Lester Memorial Lecture and the State of the Cancer Center Address from Evers. Over time, the event evolved into what it is today: an engaging exchange of ideas, a forum for robust conversation and budding collaborations, and a showcase for up-and-coming scientists, all centered on the next generation of cancer researchers at Markey.

“MCCRD is a celebration of our accomplishments over the year, the progress of our science and our progress in our common goal in the fight against cancer,” O’Connor said. “It’s a day when we put everything aside and celebrate everything great about Markey and our science.”

Exhibitors were brought into the event in 2013 in order to raise money for hosting the endeavor and expand the options for networking and learning during lunch. The event now recognizes Markey’s Difference Makers of the Year – those who go above and beyond to make Markey a positive place for patients and healthcare professionals alike. The event evolved to include accomplished guest speakers who have a wealth of knowledge to share with attendees. As O’Connor hands the reins of the event over to Dr. Tianyan Gao and Keys, she looks forward to the progress the two will make in continuing the event’s upward trajectory.

O’Connor’s own research on triple-negative breast cancer was selected by the Markey Women’s Strong program to receive a $50,000 Distinguished Research Grant in 2017, the program’s inaugural year. Markey Women’s Strong, a UK Markey Cancer Foundation program, strives to empower passionate ambassadors for the research and clinical work at Markey, and is presented to recipients during an MCCRD awards presentation.

The opportunity to explore research opportunities and collaborate with new colleagues continues to draw an eager crowd. MCCRD routinely reaches Singletary Center capacity with over 400 attendees each year.

“Markey Research Day is a day when we put everything aside and celebrate everything great about Markey and our science.” Dr. Kathy O'Connor

In 2019, MCCRD continued its celebration of unique collaboration with 138 posters and 442 attendees, making it the most well-attended event to date. Despite a decade of success and positive feedback, Keys is still looking for ways to improve by asking attendees for their feedback.

The most common reply: Never change the State of the Cancer Center Address. Evers’ annual recap of the previous year in treatment, research and more has become a staple of the event, offering attendees the chance to hear about Markey’s goals from the director himself.

“You go there expecting to find one thing but come out with new, innovative findings from so many people,” Keys said. “This is one way that we can help people see how many paths into cancer research are out there. It’s more than the things they’ve been told about or grow up with.”