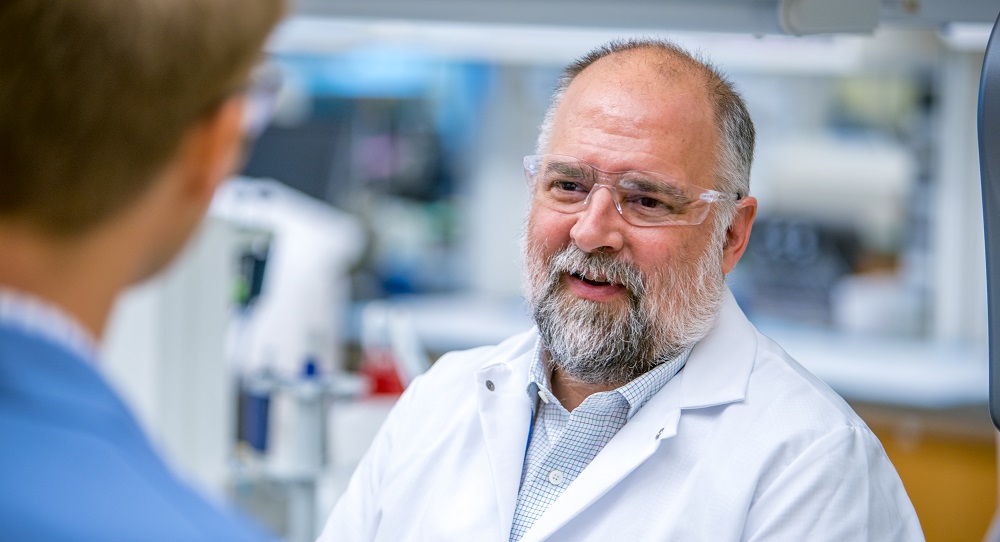 Kip Guy, PhD, joined the University of Kentucky in late 2016 as dean of the College of Pharmacy.Having come to UK from St. Jude Children’s Research Hospital, Guy has focused much of his research endeavors on pediatric cancers, including ependymoma, leukemias and medulloblastoma.

We sat down with Guy to talk about his interest in cancer research, what he’s working on now and why he’s excited about collaborating with researchers at the UK Markey Cancer Center.

What excited you about working with Markey?

The University of Kentucky is an incredible place with a strong and vibrant cancer center in Markey. The UK College of Pharmacy is one of the strongest colleges in the country, if not the world.

In addition, UK and Markey are right in the middle of an area with high health disparities, particularly in cancer. The combination of a strong academic enterprise and a hospital system point us to exciting opportunities in cancer.

What sparked your interest in cancer research?

I like neat solutions to problems. Initially, chemistry was attractive because most things could be explained with theory.

As I was learning that field, I had two formative experiences. First, my aunt passed away from latestage breast cancer. I learned that simply trying to kill cancer cells, as most medications did then, was not enough – you also have to focus on harnessing the immune system and preventing the spread of the cancer. This pointed me toward finding new ways to control cancer.

Second, I interacted frequently with oncology nursing staff. This taught me that cancer treatment is often difficult in a practical sense – the treatments wreak havoc on the patient and are often complicated to use. It led me to direct efforts toward finding targets that would simplify and unify therapy.

What are your current cancer research projects?

Earlier in 2017, my team published a study in Nature Chemical Biology that shows promise for finding new solutions to treat lung cancer, an especially prominent health problem in Kentucky.

Working with researchers at St. Jude Children’s Research Hospital and Memorial Sloan Kettering, we developed a compound that blocks tagging of cancer-causing proteins to control their stability and localization within a cell. We were expecting that this compound would block multiplication of cancer cells by controlling the cell life cycle. Unexpectedly, the compound had little effect on cell multiplication itself.

While we didn’t kill the cells, we prevented them from being metastatic, and lung cancer is a disease that’s really characterized by metastatic growth. We’re pretty excited about that.

What is your role in tackling Kentucky's cancer challenges?

I foster and support collaborative projects that are centered around drugs. Our college’s research domains include outcomes research, clinical pharmacy, precision medicine and drug discovery, which all contribute to UK cancer research.

I also serve as a leader by example. By maintaining an active research program aimed at practical, useful drug discovery, I show that we can achieve success in developing drugs for cancer. More importantly, we provide an ongoing learning example of how to discover new drugs.

How are you working to enhance UK’s cancer research?

As a researcher, I’m characterized by interdisciplinary, interprofessional work. My experience has been that it’s never as simple as you think it’ll be. You need to bring a wide range of thinking to the problem, construct different models of how the drugs might work, and dig into different ways of explaining what’s going on.

To do that, you bring together a diverse range of scientists and clinicians regularly, develop a common understanding, and then synthesize new work from that framework. I apply that model of working to each problem I engage with, especially in cancer.

This is particularly important in a complex disease like cancer, where seemingly similar tumors can actually be unique – each being the product of its genetics and environment.

What’s the benefit of having the College of Pharmacy and Markey Cancer Center on one campus?

We’re not just on the same campus – we share a facility. Markey Cancer Center has many researchers who reside here in the Lee T. Todd, Jr. Building. Many of our faculty are members of Markey. This gives them the opportunity to physically interact every day and really facilitates collaborative work.

We sit at the crossroads for any project that’s going to do a therapeutic intervention that involves a drug. At any given time, Markey has literally hundreds of basic, translational and clinical studies underway, and many of those have a new or repurposed therapeutic agent at the focus.