We also participate in a number of clinical trials, allowing us to offer some treatments not available elsewhere. To extend the reach of our Adult Heart Rhythm Program, we provide the only EP telemedicine outreach clinic in the region through which our EPs visit patients across Kentucky, as well as a large physician affiliate network—all so that patients can access the expertise of our UK physicians, closer to home.

Meet our Director of Electrophysiology 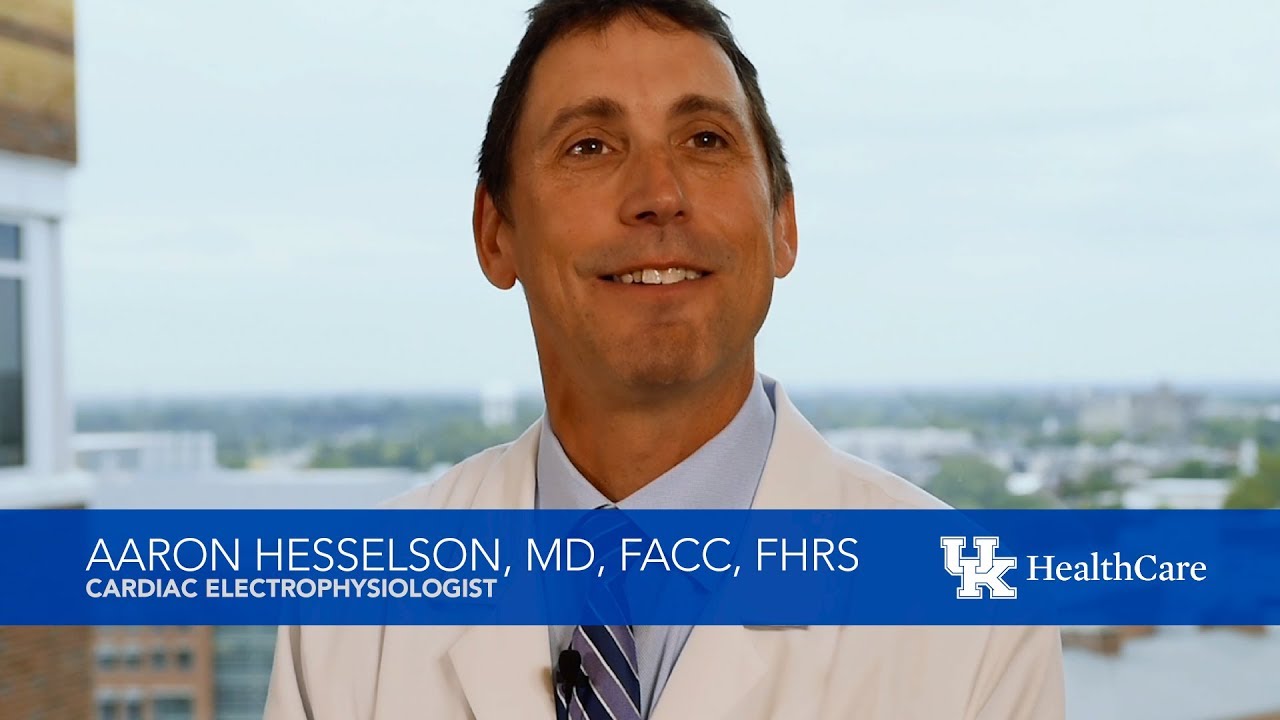 Heart rhythm conditions are called this because they are problems with the rhythm of the heartbeat. An abnormal heartbeat is called an arrhythmia and is caused by a problem with the electrical system that regulates a steady heartbeat. That’s why we sometimes call our electrophysiologists heart electricians.

There are different kinds of arrhythmias, and our Heart Rhythm Team has extensive experience treating and helping adult patients manage all types of arrhythmias. Continue reading about the different types of heart rhythm conditions.

Because arrhythmias and their symptoms can come and go, they can sometimes be difficult to diagnose. Our Adult Heart Rhythm Program uses several leading-edge diagnostic tests to further understand and identify heart arrhythmias. Learn about how our team diagnoses heart rhythm conditions.

Read about each type of arrhythmia treatment that we offer.

In addition to our leading-edge treatment offerings, we provide access to clinical trials studying new and innovative approaches to managing various heart arrhythmias. This means that patients in the Adult Heart Rhythm Program at UK can experience potentially life-saving treatments not available at other institutions. For more information on current clinical trials, talk with your UK healthcare team or visit our Clinical Trials at Gill webpage.

Atrial fibrillation, also known as AFib or AF, is a common type of heart arrhythmia – a problem with the rate or rhythm of the heartbeat in which the heart can beat too quickly, too slowly or irregularly.

An arrhythmia is an abnormal or disturbed heartbeat and can cause patients to feel unsettled. Most patients can find relief with newer medicines that solve their problem by keeping their arrhythmia in check. However, some patients may need a minimally invasive procedure. Listen to Dr. Aaron Hesselson discuss electrophysiology in this podcast.

Imagine going to the doctor and finding out you had a heart attack without knowing. That was Carolyn Snow's reality 15 years ago. During a normal check-up, Snow's family physician heard a heart murmur that was concerning, so she referred Snow to a cardiologist. After extensive bloodwork and numerous tests, it turned out that Snow was in fact having a heart attack. Read the full story »

Jon Wes Adams usually went right when starting his run at the UK Arboretum. But on the evening of June 28, he decided to go left, toward the center of the park. It was a decision that saved his life. A little more than six miles into his jog, Jon Wes’ heart stopped and he collapsed. The condition, called sudden cardiac arrest, is fatal if not treated within minutes. Read the full story »

We caught up with Dr. Aaron Hesselson for our latest Making the Rounds interview. Dr. Hesselson started at UK HealthCare in the fall of 2017, bringing with him nearly 30 years of experience in cardiac electrophysiology. He now serves as the director of electrophysiologic services at UK. Read about Dr. Hesselson »

If you have an irregular heart rhythm, an ICD could save your life

If you have an irregular heart rhythm, your doctor might recommend putting an implantable cardioverter defibrillator (ICD) inside your chest. An ICD constantly monitors your heart rate and rhythm and can potentially save your life if your heart rate quickens to a dangerous rate. Here’s how an ICD works and how it’s implanted »

You can check to see if you have AFib. Here’s how.

Most Americans are unaware of the potentially life-threatening link between the heart condition atrial fibrillation (AFib) and stroke. According to the American Heart Association, people with AFib are five times more likely to have a stroke than the general population. Here’s what you need to know about this common heart condition »

Howard Hitsman has seen a lot in his 84 years. As a chief petty officer for the U.S. Navy, Hitsman served the Joint Chiefs of Staff aboard the USS Northampton – also known as “The Floating White House” – during the Cuban Missile Crisis. Traveling to Washington was Hitsman’s latest great adventure, and his visit to the UK Gill Heart & Vascular Institute on Sept. 10 was the last hurdle to prepare him for his Honor Flight. Read Howard's story »

Are you at risk for atrial fibrillation?

Some signs of atrial fibrillation – or AFib – are hard to ignore: a racing heartbeat, chest pain, dizziness or trouble breathing. However, almost a quarter of the 2.7 million Americans with AFib have no symptoms at all. If you have AFib and you don’t treat it, it can cause a stroke or heart failure. Here’s how to know if you’re at risk »

In 2015, identical twins Gardner and Jon Wes Adams, then in their mid-20s, both nearly died when their hearts suddenly stopped beating. The incidents happened months apart, but the cause was the same: Brugada syndrome, a rare congenital heart rhythm disorder. Read about the research they inspired »

CONNECT WITH US ON
SOCIAL MEDIA