The groundbreaking cardiovascular research and treatment at the Gill Heart & Vascular Institute would not have been possible without the benevolent gifts of Linda and Jack Gill. 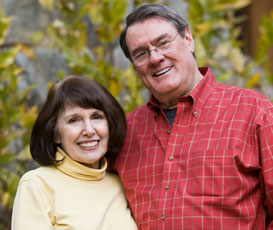 Linda Challis Gill is a former resident of Fort Thomas and Louisville, Kentucky, and a graduate of the University of Kentucky. A former teacher, she served as president of the Palo Alto, Calif., Parent-Teacher Association and was involved in coaching and student counseling. She also spent 18 years as a docent and a community volunteer at the Stanford Medical School and is a board member of the University of Houston School of Music. During her hospital volunteer work, she learned about the high incidence of coronary disease in Kentucky. In recognition of her community efforts, the university has awarded her an honorary doctoral degree at the 2001 commencement ceremony.

Jack M. Gill is a native of Lufkin, Texas, and a graduate of Lamar University (B.S., chemistry) and Indiana University (Ph.D., organic chemistry). He worked for several high-profile companies, and in 1970 founded Autolab, a company specializing in instruments for laboratory applications. In 1981 he co-founded Vanguard Venture Partners, a venture capital firm in Palo Alto, California and Houston, Texas that focuses on funding high technology and medical/life science startup companies. In 1999 Jack won the Horatio Alger Award for Distinguished Americans, honoring people who have overcome personal adversity through integrity, hard work and a strong dedication to helping others. Today he continues to serve as a general partner for Vanguard Venture Partners, a member of the Indiana University Dean's Advisory Board of the School of Business and Arts & Sciences, and a member of the Harvard Medical School faculty.

The Gills live in Houston, Texas, and have established the Gill Foundation of Texas, a charitable organization that endows chairs, professorships and scholarships in California, Indiana, Texas and Virginia, as well as Kentucky. They have three sons and one daughter.