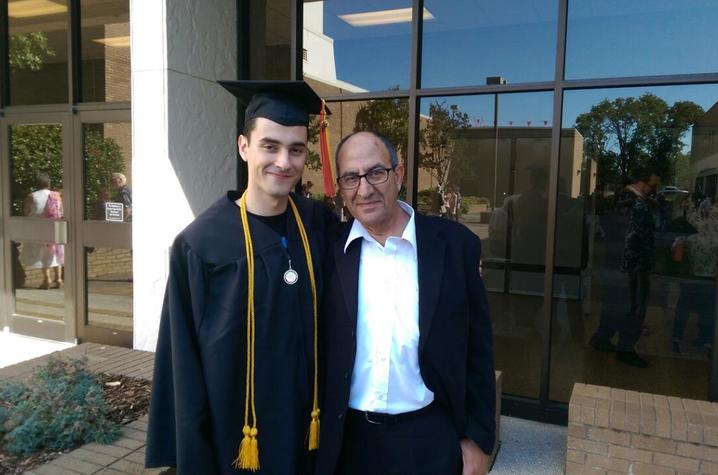 When Dr. Hatim Omar‘s 18-year-old son Kareem called to complain about a lack of feeling in his legs, Omar knew it was serious.

“My son is an amazing kid,” Omar said. “He never complains.”

Omar told Kareem, who was at college in Alabama, to go immediately to the emergency room and then to a neurologist. Kareem was diagnosed with Guillain-Barre syndrome, a diagnosis that didn’t quite add up to Omar.

“Two days before, (Kareem) had a flu vaccine,” Omar said. “And the neurologist didn’t think about anything else. As a physician, I didn’t accept that.”

Guillian-Barre syndrome is often associated with flu vaccines that use a dead strain of the virus, but Omar’s son had been inoculated with a live strain. Omar had Kareem return to Lexington, where an MRI confirmed his son had multiple sclerosis (MS).

In MS, the body’s immune system turns against the nervous system, attacking myelin – the fatty substance that insulates the nerves – as well as the nerves themselves. The cause is unknown, there is no cure, and any delay in diagnosis can lead to the death of thousands of nerve cells and accelerate disability.

“So if I wasn’t a physician, what that would have meant is that he would not have been diagnosed until the second relapse,” Omar said. “And every relapse, that’s more nerve cells getting killed. Any failure or lack of treatment makes things worse.”

MS, one of the most common neurological disorders, is typically diagnosed in adults, but the symptoms can start when a person is much younger. Because MS is a relapsing-remitting disease – meaning the symptoms come and go – people don’t typically report their symptoms until MS has taken a significant toll.

Assumptions can cause harm

Omar is a physician at UK Adolescent Medicine, and he wants physicians who treat children to consider MS when evaluating symptoms.

“We don’t know what the cause is, so the best we can do at this stage is that any time a kid has atypical symptoms is to have it on our minds that this is a possibility. So don’t assume, as in my son’s case, ‘Oh, it’s the flu vaccine, it’s Guillain-Barre, we shouldn’t think it’s something else.’

“We tend to think what is most likely. I’ve been in the medical profession for 30 years, and the last thing I think about is the correct thing. It’s always important to put all the differentials together and eliminate every one of them.”

Omar published a book titled “Multiple Sclerosis in Children and Adolescents.” Complied from research by pediatricians, neurologists and MS experts, the book aims to educate medical providers of the psychosocial and financial impact of MS on not only the patient, but the family.

“I went back and read everything there is to read about MS, just explored everything that’s known so far, which isn’t much,” Omar said. “But then I found that many patients with MS go a year or two without being diagnosed, especially if they are under age 20.

“Pediatricians, physicians, and even neurologists tend not to think about MS for small kids. What I really wanted to do was to remind people not to ignore or miss MS as part of your differential. A year or two with no treatment makes a huge difference. Instead of getting disabled at age 50, you’re getting disabled at 35. You cannot afford to miss it.”

MS is a deeply complex disease, and insurance companies often overrule doctors when it comes to treatment.

“The neurologist says, ‘I’m going to put him on this medicine because it’s the best for him.’ The insurance says, ‘No, you’re going to put him on that medicine,'” Omar said. “And (the insurance company) doesn’t understand two things. First, the failure of one drug is very costly in terms of disability because you are now more disabled. And second, it’s going to cost (the insurance company) more, because that drug failed and you’re going to do another drug, and another hospitalization, and another MRI.

“This is only in the U.S. It doesn’t happen in any civilized nation where the doctor says, ‘This is what’s best for my patient,’ and a clerk in the insurance company says no. … Physicians need to understand this so we can fight for our patients.”

Navigating the insurance companies and their networks presents an enormous challenge to families facing a MS diagnosis. Omar’s son now lives in Los Angeles and must return to Lexington once a month for an IV infusion, because his insurance company won’t pay for treatment outside of the network.

Families without insurance, or who have an insurance company deny treatment, face staggering medical bills. Treatments can range from $10,000 to $50,000 a month. Without treatment, more nerves die and the disability accelerates.

“In an attempt to cut costs, (insurance companies are) costing us lives, costing us grief and suffering. There is nothing like watching your kid being tortured or suffering,” Omar said.

What should parents do?

Because Omar is a physician, he was able to catch his son’s misdiagnosis. What would a parent with no medical training do in that situation? Omar has some advice.

“For the parents, if what you are told is not satisfactory, you don’t need to be a specialist. You know your kid best,” Omar said. “If you aren’t satisfied with the diagnosis, get a second opinion, third opinion. Don’t give up until you are satisfied.”

Our People-Neurology and Brain Health