Conrad Webster knew his time was almost up. A double transplant changed that.

He pushed through a failing heart for a decade, determined to avoid undergoing a transplant. But in the past year, 49-year-old Conrad Webster knew his time was almost up.

The stoic Louisville resident and Operation Desert Storm veteran, who was used to showing no weaknesses, was ready to seek serious help.

“I was getting scared because I was just getting so sick,” he said. “I was sick all the time, it just drained me.”

Diagnosed with cardiomyopathy – thickening and weakening of the heart muscles – in 2006, Webster spent the next several years managing the disease with medications. As his condition worsened, he experienced transient ischemic attacks (mini-strokes) from blood clots around his neck and heart.

Complicating matters further, Webster had also inherited polycystic kidney disease unrelated to his heart problems. This condition causes the kidneys to fill with cysts and ultimately fail. He began going in for dialysis three times a week, ultimately receiving medication for his heart during these trips as well.

In March, Webster’s problems came to a head when he collapsed at his fiancee’s house in Cincinnati, complaining of a severe headache.

As his daughters held him up, his fiancée, Leticia Willis, called 911 and he was rushed to a local community hospital. But Webster needed both a heart and kidney transplant, and dual organ transplants aren’t performed at every transplant center. After being turned away at three different regional transplant centers, Webster’s sister contacted  UK’s transplant coordinators and he came in for an evaluation.

“Nothing seemed to work,” Willis said. “We were happy to come here. We were ready to try anything.”

At UK, he was evaluated by members of both the heart and kidney transplant teams. Due to the severity of his medical issues, Webster says UK cardiothoracic transplant surgeon Dr. Alexis Shafii told him he needed to be admitted right away.

“Dr. Shafii looked at me and said, ‘You’re not gonna leave here today,’” Webster said. “He said I probably wouldn’t have made it back home.”

On April 11,  he was listed for transplant, holding a spot high on the waiting list.

Many patients endure a lengthy hospital stay once they’re listed for transplant, but Webster’s wait was surprisingly short – just three weeks after he was admitted, and only a week of being listed for transplant, he learned that doctors had found a compatible donor. Willis, a nurse who works night shift, had returned to Cincinnati to work when she got a call from Webster to come back to UK.

“He called me and said, ‘You have to get back right away, they have a donor,’” she said. “He was talking so fast and crying, I could barely understand him.” 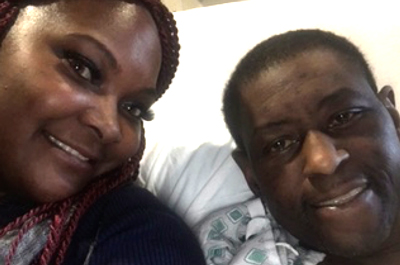 On April 18, around 2 a.m., Webster officially received his new heart, while his kidney was transplanted about 12 hours later. Following heart transplants, patients are usually encouraged to become mobile, often walking laps with assistance around the cardiovascular intensive care unit on  the 8th floor of UK Chandler Hospital’s Pavilion A. A few days after Webster’s surgery, medical staff had him up out of bed and moving around, and within weeks, he had already regained a surprising amount of strength and stamina.

“I was walking so fast, they said they knew I’d be out of there real quick,” Webster said.

On May 14, just under a month after his double-organ transplant, Webster was discharged to go home. Since then, every day is an improvement on the last.

“I already feel a lot better,” he said. “I’m getting my stamina back, I’m breathing better.”

After overcoming a decade of serious illness, Webster can finally focus on enjoying life. He’s making plans to travel more, and in October, he and Willis – partners for 11 years – plan to get married. Though Louisville is his hometown, UK and its staff of transplant specialists will always hold a special significance.

“They’re unbelievable, they keep up with me all the time,” he said. “I found the right place. No one else would do my transplant, and I was running out of time.”