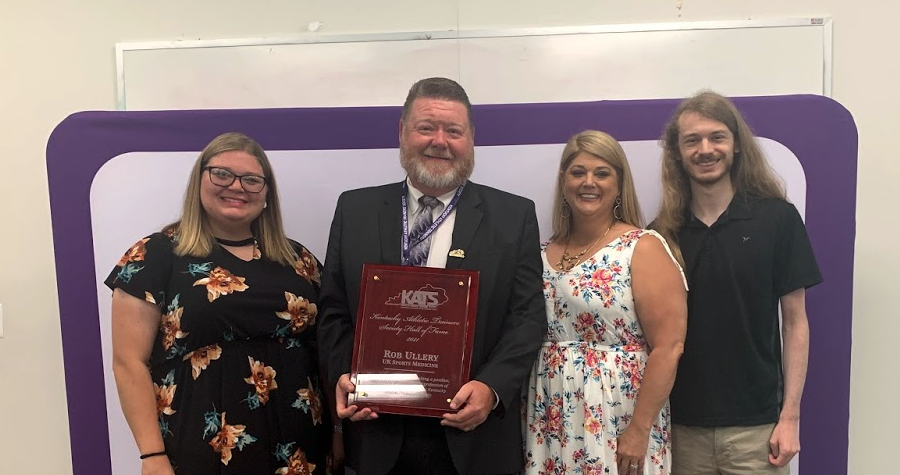 After more than a quarter century serving patients and practicing his craft, a longtime member of the UK HealthCare family has earned a distinct honor.

A certified athletic trainer, Ullery – who began his career in Lexington in the early 1990s – is the newest member of the Kentucky Athletic Trainers’ Society (KATS) Hall of Fame.

Ullery was officially inducted during a ceremony at the group’s annual meeting June 5 at Bellarmine University in Louisville. He was joined by his wife, Nancy; daughter, Morgan; and son, Zachary.

Also honored were UK HealthCare’s Peter Gray, a certified athletic trainer who received the Award of Merit, and the late Amy Waugh, who was named Clinical Athletic Trainer of the Year.

“To be inducted into the Hall of Fame is an honor that hasn’t completely set in. I’m completely humbled,” Ullery said. “To say that I don’t feel as if I am worthy is very cliché, but is very true.  I have learned from a very early age to respect who has come before me and to honor the past. I truly honor those who have come before me and value the relationships that I have developed with all of them.”

Growing up in tiny Greenville, Ohio, Ullery was an eager young athlete who played football and baseball — and also wrestled. As a high school freshman, he sustained an injury that ended his football career. Out of that misfortune, the career path that became his passion was born.

“I was introduced to the field of athletic training by a local physician. He paid for me to go to a camp to learn about what athletic training was, and I instantly fell in love with the field,” Ullery said. “I was like, ‘what better way to still be involved in sports and be able to help people?’ I knew as a sophomore in high school that this was what I wanted to do the rest of my life.”

After earning an undergraduate degree from Ohio Northern University and a master’s from Ohio University, Ullery made his way south to Kentucky.

“My first job was with Dr. Mary Lloyd Ireland, who I consider a mentor, at Kentucky Sports Medicine,” Ullery said. “She hired me straight out of graduate school and placed me at Tates Creek High School. At that point, I knew Lexington was my home.”

Asked about his favorite memories from nearly three decades as an athletic trainer, Ullery said the relationships he’s forged stand out more than his involvement in any particular team’s achievements.

Among Ullery’s cherished relationships is the one he built with UK HealthCare colleague Amy Waugh, who passed away at age 40 in November 2020.

When former UK Sports Medicine Director Sheri McNew — whom Ullery cites as a major mentor — stepped down, Ullery and Waugh were promoted together to help lead the Sports Medicine program.

“Amy and I were very close. So close that my wife called Amy my ‘work wife,’” Ullery said. “She took care of me when I was having problems, and I always was a listening ear for her when she faced adversity.”

During the KATS Hall of Fame ceremony, Ullery presented Waugh’s Clinical Athletic Trainer of the Year award to her family.  “Amy’s legacy is forever established in the UK Sports Medicine community and it is with great joy that I was asked to present this award to her family and honor her legacy,” Ullery said. “Her family is very special to me.”

Ullery continues to honor Waugh’s legacy and build upon his own as he begins his 25th year at UK Sports Medicine, and he’s proud to be part of the UK HealthCare team.

“We are all part of a large team aiming to provide the best care that any patient can receive.”

For more information or to schedule an appointment with a UK HealthCare provider, call UK Orthopaedic Surgery & Sports Medicine at 859-323-5533.

When should I see a primary care sports medicine physician?