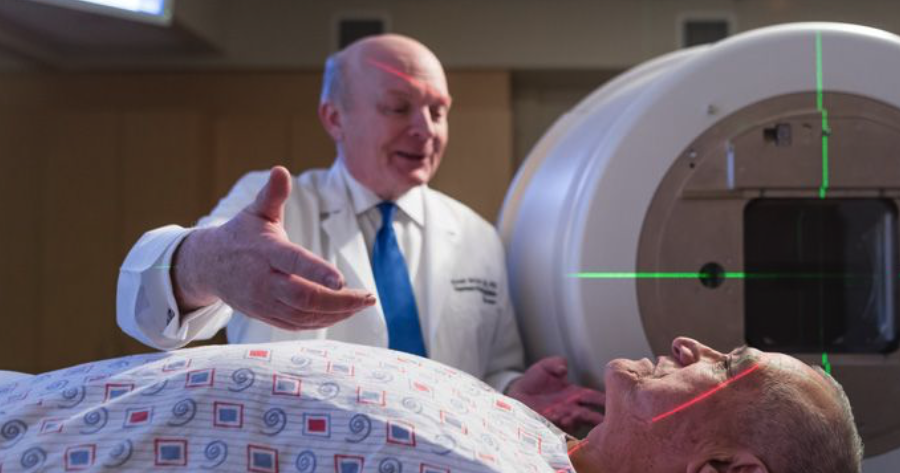 Stereotactic body radiation therapy (SBRT) is an alternative to surgery for people with early-stage lung cancer. With only a few days of treatment, it can cure up to 90 percent of patients.

At the Markey Cancer Center, SBRT is used for people with stage I or stage II lung cancer who aren’t eligible for surgery. Because X-rays are highly targeted and healthy tissue gets very little radiation, side effects from SBRT treatment are rare.

The importance of lung cancer screening

Lung cancer starts as an abnormal cancer cell. Early-stage lung cancer can develop into much more serious late-stage cancer in as little as two to four years, so screening for lung cancer is very important.

The need for early treatment of lung cancer

“In the past, many patients with early-stage lung cancer didn’t receive any treatment,” says Dr. McGarry.

However, when he looked at a database of Veterans Administration (VA) patients 20 years ago, Dr. McGarry discovered the three-year survival rate for stage I non-small cell lung cancer was quite low – only 9 percent. Another study of data from early-stage patients in the California Cancer Registry also showed poor survival rates.

SBRT is sometimes called radiosurgery, but it isn’t surgery. There are no incisions. It’s a specialized type of radiation therapy.

While a standard course of radiation treatment for lung cancer might take 30 days, SBRT uses the same amount of radiation in only three treatments. “It’s extremely intense and extremely effective,” says Dr. McGarry.

The difference is the way the radiation is administered – in carefully targeted, high doses. This precision allows Dr. McGarry to safely focus very high doses of radiation beams on a tumor and avoid any surrounding tissue.

SBRT involves careful planning before treatment ever begins. During the planning process:

During the treatment itself, a radiation machine called a linear accelerator delivers the focused X-rays. The patient lies on a table that can move in many different directions. The treatment team can adjust positioning in increments as small as millimeters, allowing for extreme precision.

Most people only need three treatment sessions. Each session typically lasts about 10–15 minutes. At three years, 95 percent of patients have no evidence of disease with this therapy.

Quality control is especially important for such a technical treatment. The Markey Cancer Center has a specially trained team with years of SBRT experience.

In addition to Dr. McGarry, who creates the overall treatment plan and is intimately involved in all stages of planning and treatment, the treatment team includes:

Who is a good candidate for SBRT?

SBRT is standard treatment for anyone who isn’t a good candidate for lung cancer surgery. It’s also an option even if someone has reduced lung function.

Reasons someone may not be a suitable candidate for lung cancer surgery include:

The future of lung cancer treatment

Dr. McGarry is the co-chair of data safety management for the Veterans Affairs Lung Cancer Surgery Or Stereotactic Radiotherapy Trial (VALOR) clinical trial. This trial is investigating the difference between SBRT and standard lung cancer surgery to see if one treatment is better than the other.

Listen: What you should know about lung cancer

Got questions about lung cancer? We have answers.