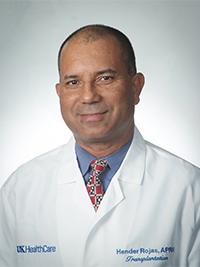 Hender Rojas received his Master of Science in Nursing from the University of Massachusetts Graduate School of Nursing, with an acute care practice emphasis in cardiology.

In 2008, he joined the UK Transplant Center. He has worked in the outpatient and inpatient service, being involved in every facet of liver, kidney and pancreas transplant care. He has been a liaison between transplant surgery and hepatology, as well as critical care and internal medicine teams.

He has served as a sub-investigator in several clinical trials and played a critical role in developing the smoking cessation and weight loss programs for the UK Transplant Center. He also served as a mentor to several nurse practitioner and physician assistant students throughout my time at UK.

Based on nomination letters from the team of surgeons at UK HealthCare, the American Society of Transplant Surgeons honored Rojas with the 2016 Advanced Transplant Provider Award.