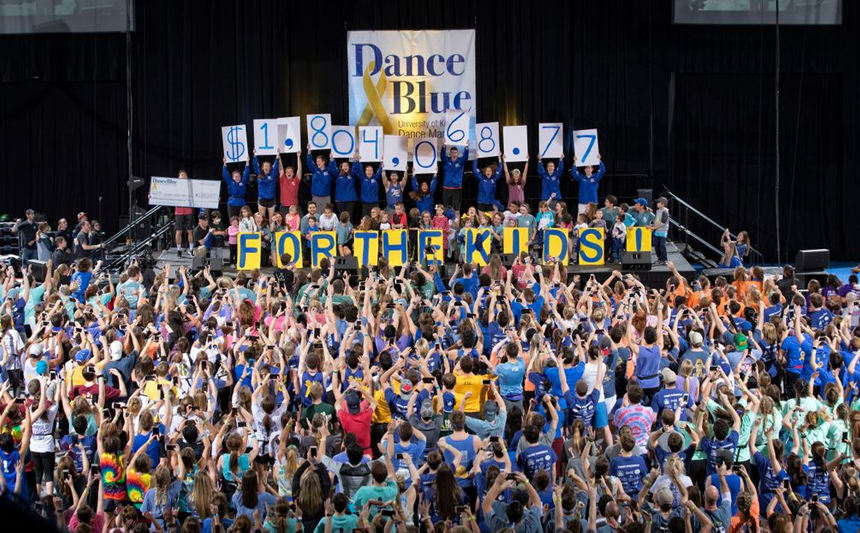 “I could not be more proud to be a student at a university that empowers students to be a part of something greater than themselves,” said Madison Conroy, the DanceBlue chair. “Over the years, the students have grasped on to the idea of DanceBlue and worked so hard toward the greater mission of ending pediatric cancer. While it will be bittersweet to see DanceBlue 2018 come to a close, it is exciting to know that there are so many passionate students who will continue to grow DanceBlue in the years to come!”

DanceBlue is UK’s largest student-run philanthropy — a yearlong fundraising effort involving thousands of UK students, culminating in a 24-hour no-sitting, no-sleeping dance marathon. All of the money raised by DanceBlue goes to the Golden Matrix Fund and cancer research.

Since the organization’s launch in 2006, DanceBlue has raised more than $13.4 million, providing financial and emotional support for children and families living with childhood cancer.

DanceBlue students volunteer about 1,000 hours in the clinic each year. Every week, dozens of students produce smiles and laughter among patients and families. Students give their time because of that one phrase that embodies the DanceBlue mission: “For The Kids.”

The DanceBlue Kentucky Children’s Hospital Hematology/Oncology Clinic opened its new facility in 2017 after a complete renovation funded solely by DanceBlue. Learn more about DanceBlue and how to support its efforts. Also, connect with DanceBlue on Facebook and Twitter.