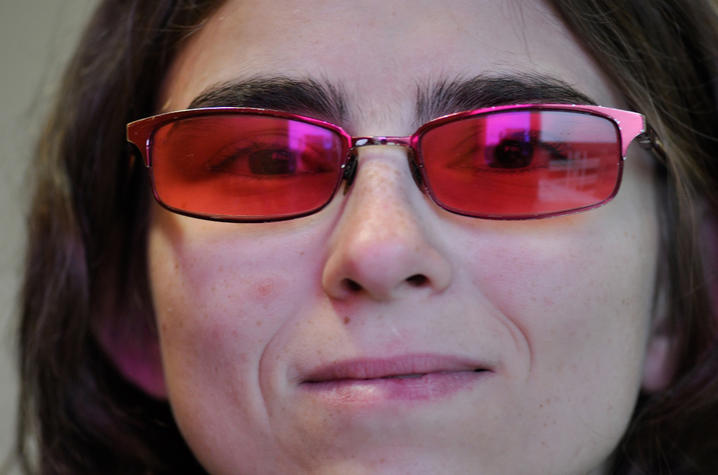 When Alexis Johnson, a 22-year-old avid equestrian and resident of Versailles, Ky., prepares to jump with her horse Joey in competition, she is keenly focused on what lies before her. There are no distractions, no nerves and no fear. Everything around her is in shades of gray, and the only sound she hears is the rhythmic pace of Joey’s hooves as he begins to canter.

As Joey jumps over the fence, Johnson feels like she’s flying – a feeling of pure joy and exhilaration. Her limitations are nonexistent.

It doesn’t matter that she is legally blind.

Twenty-two years ago, Alexis’ mother, Lynn Johnson, was standing outside on a sunny day holding her then 8-month-old daughter. She noticed the pupils of Alexis’ eyes were so large that she thought the sun might burn them. Alexis also squinted her eyes a lot in bright light, displayed repetitive rapid eye movements and had one eye that was turned inward.

Lynn took Alexis to a general ophthalmologist but wasn’t satisfied with the lack of answers. She made an appointment with Dr. Julia Stevens, an ophthalmologist at UK Advanced Eye Care, for a second opinion.

After several tests to rule out brain injury, an electroretinogram (ERG) confirmed a diagnosis of congenital achromatopsia, a rare hereditary disease that affects only one in 33,000 people in the U.S.

Not only had Lynn found answers, she found a physician who would provide healthcare and support for Alexis throughout her life.

An ERG examines the light-sensitive cells of the eye, the rods and cones, and their connecting cells in the retina. When Alexis was tested 22 years ago, a large contact lens was placed on her eye to measure the light responses in her retinas.

“We were fortunate because UK was one of the few facilities to have an ERG,” Lynn said. “The wires that record the natural responses to light showed that Alexis had no response to light. The line on the screen was flat.”

Stevens explains that achromatopsia is an autosomal recessive disease, meaning two copies of a mutated gene must be present in the affected person.

“Both parents must be carriers, and their child will inherit one recessive gene from the mother and one from the father,” Stevens said. “Individuals with achromatopsia have nonfunctioning cones and rely on rods for their vision. Rods do not function well in daylight, thus people with achromatopsia have extreme sensitivity to light, poor color vision and poor central (reading) vision.”

Today, UK Advanced Eye Care has the most technically sophisticated ERG technology available anywhere, offering significant advantages over the prior system. The new ERG machine provides easier testing with comfortable-fitting electrodes that can sit on the skin or on the surface of the eye, highly sensitive and reproducible signal recording, and a large library of tests that can be used to determine problems in the visual pathway to better understand why patients are experiencing vision loss.

UK Advanced Eye Care recently acquired a new, smaller ERG machine that can easily be taken into the operating room and to other locations throughout the hospital to test for diseases of the retina and optic nerve. The current equipment can be used for ERGs on babies and toddlers without having to use sedation, as the system is handheld and can be easily positioned over the patient’s eye during testing.

A lifetime of comprehensive care

At UK Advanced Eye Care, patients can see multiple subspecialists in one location, allowing their complex eye care to be provided by an integrated team.

Stevens says that in Alexis’ care, for example, she had testing through the retinal service, care for her achromatopsia with appropriate eyeglass prescriptions, diagnostic tests by Stevens and a pediatric ophthalmologist, and assistance from the optometry service and optical shop to provide special tinted contact lenses.

As an infant, Alexis was fitted with red-tinted glasses. The red tint is protective of the eyes and filters out light rays, which makes it easier for her to recognize outlines and objects.

After Alexis experienced some bullying in elementary school because of her bulky red glasses, Lynn had Alexis fitted for red contacts, which she said made a big difference. Red-tinted contacts completely seal the eyes so light cannot enter, and Alexis says they’ve made her “feel normal” for the first time.

Alexis has 20/200 vision and is legally blind. She only sees in shades of gray with limited color perception and no fine vision. Even so, she’s confident that nothing in life is beyond her reach because of achromatopsia.

At age four, Alexis learned to play soccer by the sound of the footsteps around her. In preschool, she zip-lined across an open field. She danced her way from first grade through early high school as she learned ballet, tap, jazz and hula. She played the flute in her high school marching band, attributing dance lessons with helping her get into formation relative to other people. She completed high school and attended Bluegrass Community and Technical College.

Her love of horses started when she was 2 or 3 years old and hasn’t waned. Recently, Alexis participated in the American Quarter Horse Congress, which she refers to as the “Super Bowl of quarter horse shows” because of its enormity and level of professionalism. She says the crowds don’t make her anxious or nervous.

“I don’t care about all the people watching me, I can’t see them anyway,” she said. “It’s just me and the horse in the ring. I go in wanting to do my best with my horse as a partnership. It’s not about the ribbons; it’s about having fun and doing the best I can.

“If there is something I want to do, even if it’s hard, I will find a way because it’s always worth it.”

How often should you have an eye exam?