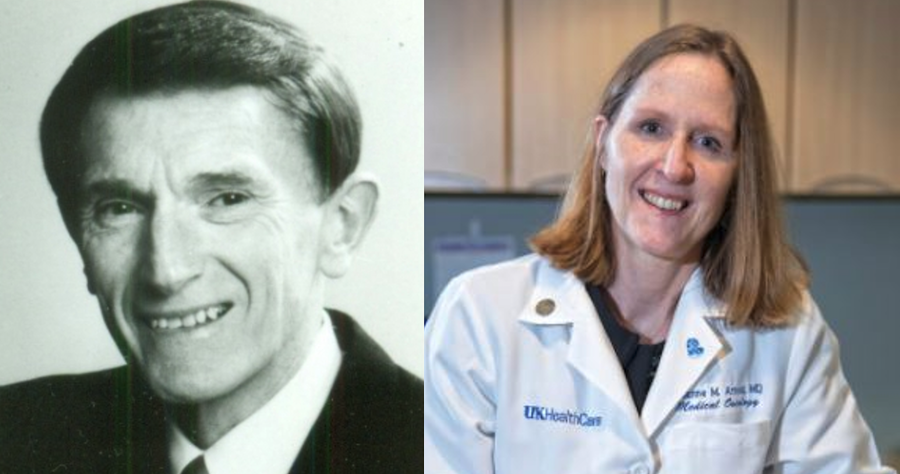 “I would definitely not be in the role I’m in now, in academic medicine, had it not been for him."

By the time she came to the UK Markey Cancer Center and became a faculty member at the UK College of Medicine, Susanne Arnold, MD, was arguably more prepared than anyone to treat Kentuckians and educate future physicians.

She was introduced to the medical field early and was surrounded by it. She recalls taking a preserved human brain to show and tell when she was in grade school (which she jokes wouldn’t happen now, though her classmates thought it was pretty cool). In high school, she shadowed physicians in a clinic, and she gained clinical experience observing autopsies before she even started medical school.

That was the perk of having a father who remains one of the most influential physicians in the Commonwealth and beyond.

Dr. Arnold’s father is William Markesbery, MD, a longtime physician who dedicated more than 40 years to medicine, research and education.

His impact has been global, though it is perhaps most visible in the UK Sanders-Brown Center on Aging, which he helped found in 1979. An expert in neurology, neuropathology and neuroanatomy, Dr. Markesbery directed the Alzheimer’s Disease Center, received National Institutes of Health support for more than 30 years, and was involved with more than 410 peer-reviewed scientific publications.

To this day, Sanders-Brown is a leader in research. Between 2015 and 2020, the center logged 42 clinical trials in prevention and treatment of Alzheimer’s disease and related dementias. It reached more than $21 million in research funding in fiscal year 2021.

Through its annual Markesbery Symposium, Sanders-Brown honors Dr. Markesbery’s legacy. The annual event aims to advance clinical and research discoveries by providing a forum to share current findings, trends, and updates on dementia and aging disorders. The 11th symposium was held in November 2021.

Dr. Markesbery was a seventh-generation Kentuckian and graduate of the first class of the UK College of Medicine. His work was rooted in his love and loyalty for Kentucky, and he made it his mission to pave the way for treatments for Alzheimer’s disease, which is prevalent in his state.

“He could have gone anywhere he wanted in the world, and he decided to stay here,” Dr. Arnold said. “I’m very proud of him for that. It has formed my own career choice to stay at UK and give back.”

Dr. Arnold didn’t study the same field of medicine, but she did share her father’s interest in finding solutions to ailments that affect Kentuckians. She currently treats patients with lung cancer and head and neck cancer as a medical oncologist. She also conducts clinical research involving these diseases and serves as professor of medicine at the UK College of Medicine.

“I would definitely not be in the role I’m in now, in academic medicine, had it not been for him,” she said.

Dr. Arnold joined the UK College of Medicine as a student and was taught neuroanatomy by her father. After completing residency at the University of Virginia, she came back for a fellowship in oncology and stayed at UK to join the faculty. That’s when the mentorship from her father really came in handy.

“He’s already been the best father in the world, a great teacher, and a lover of science, but he also taught me all the other stuff, how to stay focused on your academic career, how to plan your success, and how to be true to what you really want to do in your life,” she said.

Dr. Markesbery passed away in 2010 at the age of 77, but his legacy remains evident in the successes of Sanders-Brown. Dr. Arnold remembers her father each time she walks by the thriving Alzheimer’s Disease Research Center that is helping patients and conducting groundbreaking studies.

Its rapid autopsy program, a result of Dr. Markesbery’s forward thinking, follows patients both with and without Alzheimer’s disease and is able to perform postmortem evaluations within four hours. The center also recently announced renewed funding that will allow UK to remain among the leaders in Alzheimer’s disease research and associated neurodegenerative disorders.

This is great news for Dr. Arnold, not just because of her father, but because her family also knows the cruelty of Alzheimer’s disease firsthand. Before he died, Dr. Markesbery diagnosed his own wife, Dr. Arnold’s mother, with the degenerative disease.

“It’s really been a ravaging experience to watch her decline, so I’m passionate about this aging center leading the way to a cure of this dreadful disease,” she said. “I know they can do it.”

This experience, though devastating, only adds to Dr. Arnold’s undying passion to carry on her father’s legacy, improving the health of Kentuckians and training the next generation to follow.

UK HealthCare expert discusses what you should know about massage therapy