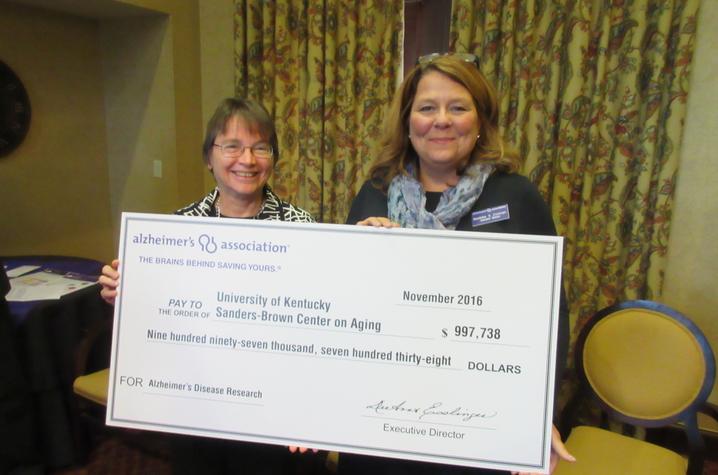 Linda Van Eldik, director of the UK Sanders-Brown Center on Aging (SBCoA), was awarded a “Part the Cloud” translational research grant from the Alzheimer’s Association. This two-year, $997,738 grant will fund early clinical trials for a promising new treatment for Alzheimer’s disease.

“Brain inflammation is now recognized as an important driver of neurodegenerative disease progression, and we desperately need new selective anti-inflammatory drugs to be tested in humans,” said Van Eldik. “This new Part the Cloud funding will help us move this important research forward.”

“Part the Cloud” is part of the broader Alzheimer’s Association International Research Grant Program, which has awarded more than $375 million to more than 2,400 projects around the world.

According to Alzheimer’s Association Executive Director DeeAnna Esslinger, more than five million Americans are currently living with this disease, and that number is projected to more than triple by 2050.

“The Part the Cloud initiative is an essential part of Alzheimer’s Association research funding because new, more effective Alzheimer’s therapies are desperately needed,” she said. “This new grant allows Dr. Van Eldik and her team to begin testing this therapy now instead of waiting on other funding sources, or not being able to do so at all.”