Homing in on tiny problems

Whitney Stevenson was in her late 30s when she began experiencing occasional shortness of breath and pressure in her chest.

“It was enough to where it would scare me,” says the 43-year-old Lexington resident. “I could do two loads of laundry, going up and down the stairs to the basement. But by the third one, I’d be so out of breath I’d have to sit down.”

Concerned, her husband would ask her what was wrong.

“I’d tell him, ‘I guess I am out of shape,’” she continues. “But then I could do it the next day, and it wouldn’t impact me.” She made an appointment with a cardiologist, who ran some tests. He noted a non-specific abnormality with her heart but never elaborated.

“It nagged at me that I felt like I never really got good information about what it was,” she says.

A few years ago, she took the findings to another cardiologist. He did an EKG and a stress test, which Stevenson failed, leading to a heart catheterization. Not finding any blockages, the cardiologist told her the stress test had been a false positive and that she was fine.

Convincing herself she was OK, she began training for a 5-K. But the shortness of breath and chest pain persisted.

Convinced she was ok

The sporadic nature of her symptoms, though, led her doctors to suggest perhaps anxiety brought them on. “Granted, I work full time; I’m also a doctoral student at the University of Kentucky; I am married and the mom of two boys,” she says. “And when this started happening I was in my late 30s, moving into my 40s. I don’t smoke. I’m not overweight.” 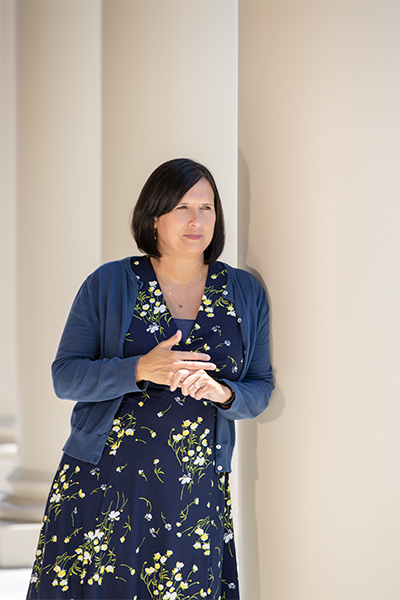 Stevenson knew she was atypical for heart disease, but she also knew something was physically wrong despite what doctors were telling her. An advocate for children as associate director for early education for Fayette County Public Schools, she decided to put those skills to work. She began reading about women and heart disease.

Her findings led her to UK HealthCare in January, wanting to see a female cardiologist familiar with the latest research. She got in to see Dr. Gretchen Wells, a non-invasive cardiologist and director of Women’s Heart Health at the Gill Heart & Vascular Institute. Stevenson says as she told Dr. Wells her story, the cardiologist listened closely, asking questions and sharing information.

“She was just a wealth of knowledge,” says Stevenson. “I thought, This lady is going to help me find some answers.”

Then in March, Stevenson experienced chest pressure and shortness of breath so intense she drove herself to the emergency room. The symptoms abated in the ER, but she was told to follow up with her cardiologist as soon as possible. When she saw Dr. Wells later that week, the cardiologist told her they were going to do another heart catherization. This time, though, they would be able to go deeper into her heart into the micro vessels through a new procedure, Volcano ComboMap testing. The testing would detect whether she had microvascular heart disease.

Dr. Wells describes microvascular heart disease, also known as non-obstructive coronary artery disease, as “when the major highway is completely open but the side roads are closed off.”

“This means the coronary artery is clear, but you still can’t deliver your red blood cells and carry the oxygen to the heart tissue where it needs to go,” she says.

Up until then, Stevenson says, no one had brought up microvascular heart disease. “That was the first time, in March of this year, that it had been mentioned to me,” she says. “So, we scheduled my heart cath. “And that is what we found. I have blockages in my micro vessels.”

Oftentimes, women who have symptoms and abnormal stress tests but whose heart catheterizations appear fine will have microvascular disease, says Dr. Wells.

Heart network pays off for Kentucky physician facing his own health crisis.