UK HealthCare Orthopaedic Surgery & Sports Medicine has helped many people regain their quality of life or return to a sport they love.

Read all other patient stories below. 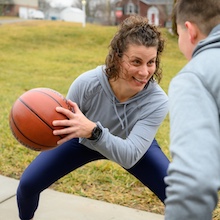 Nurse practitioner Geri Sipe has always been an active mom to her 9- and 13-year-old kids. She loves sports and so do they. But one summer night, a friendly game turned dangerous. After an injury shooting hoops, the news wasn’t good. Geri had ruptured her ACL and had multiple lateral and medial meniscus tears. But knee surgery got Geri back on the road to recovery, eager to get back on her feet. 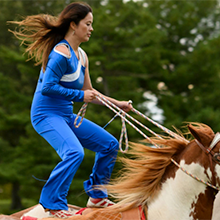 Back in the Saddle

Professional trick and stunt rider Miko McFarland competed throughout the Midwest and performed in the 2010 World Equestrian Games in Lexington, but continued to have severe knee pain from a previous injury. Dr. Austin Stone used a surgical technique that took the pressure off Miko’s knee. This allowed her to return to riding and discover a new sport of competitive archery. 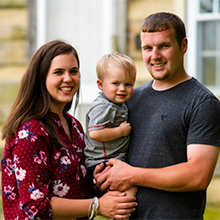 “My goal was to walk by the wedding”

While on the job, Caleb was charged by a bull which demolished his knee. He was rushed to the hospital where it was discovered the bull had torn open an artery in addition to tearing his ACL, PCL and LCL. Caleb underwent multiple surgeries had to learn to walk again. Yet, he couldn’t stop thinking about his wedding day and how he wanted to be able to walk on that special day. 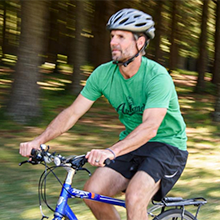 “I wanted to recover the right way”

Ryan was snowboarding with his family in Colorado when he injured his knee, but he waited to get back to Lexington to be seen because he knew he wanted to be treated by UK HealthCare orthopaedic surgery & sports medicine specialist, Austin Stone, MD. 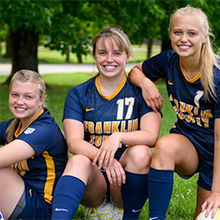 Runs in the Family

The Wells sisters, Alison, Amelia and Audrey have been athletes all their lives. Between them, they’ve undergone four ACL repairs by Dr. Darren Johnson. Today, all three girls agree that the thing they’re most looking forward to is getting back out on the field again. 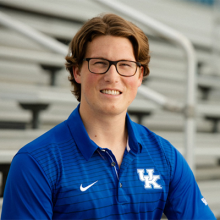 They are the best. My knee is a testament to it.

Just weeks after his latest surgery, Peter Gray, an athlete–turned–athletic trainer, was in the process of recovering from his third—and hopefully last—ACL reconstruction. As part of UK HealthCare’s Orthopaedic Surgery & Sports Medicine team, the choice of where to go for his surgery was an easy one: ACL expert Dr. Darren Johnson, with post-op care from UK HealthCare’s team of physical therapists. 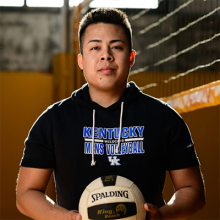 No excuses. Go get it taken care of.

Gil Bagang has been playing volleyball for years. After growing up playing tennis, he got involved with a recreational volleyball league with some friends when he was a teenager. He fell in love with the game, eventually playing at a national level. All that came crashing down when he ruptured his ACL in 2015. 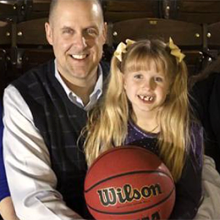 When Todd Svoboda felt a bump on the side of his right knee, he assumed it was a tennis injury, something he could clear up with a trip to a sports medicine doctor. 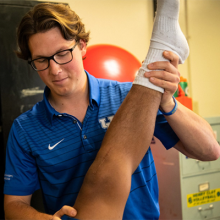 From Injured Athlete to Athletic Trainer. 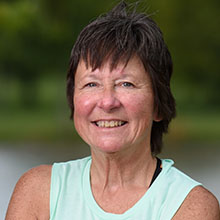 "The best move I've made"

As a barefoot water skier, Karen Douglas had to trust her body—until she couldn’t.

Karen relies on her knees to keep her active and doing what she loves. But when an old knee injury flared up, and cortisone shots weren’t enough to manage her pain, she came to UK HealthCare for a more permanent fix. There she met with Dr. Stephen Duncan, an athlete himself. Dr. Duncan recommended a new type of knee replacement that was a better fit for Karen’s active lifestyle, with a much shorter recovery time. It was the right choice: Within a year Karen was back out on the water out of pain and doing what she loves most. 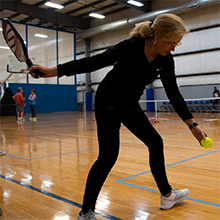 “I want to keep moving; we’ll keep you moving”

After retiring from teaching, Donna Martin looked forward to being active with her friends and playing pickleball, but she soon realized that she didn’t want to get up and walk, much less do anything else because of the pain she was experiencing. Working together, orthopaedic surgeon Stephen Duncan, MD and sports medicine trainer, Cody Begley developed a treatment plan for Donna to get back to doing the things she looked forward to in retirement. 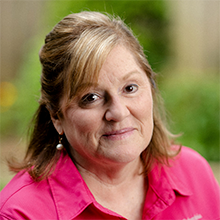 “My Knees have to be fantastic”

Suzanne Springate was on her feet as a nurse for nearly 4 decades before retiring. During the last few years of her career, she lived with pain because she thought it might be a sign of weakness. When she finally realized she needed to have both of her knees replaced, she went to Patrick O’Donnell, MD, an orthopaedic surgeon who she knew through work. 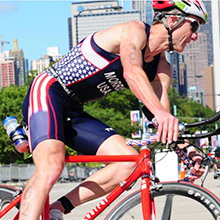 At the age of 57, Doug Morris became the first person to complete triathlons in all 50 states and on six continents. However, years of pushing his body took its toll. After seeing several doctors, he was told he would not be able to run or do triathlons again. But his life changed after reading about Patty Lane, a triathlete who had been treated by UK HealthCare orthopaedic surgery & sports medicine surgeon Stephen Duncan, MD, who is also an athlete. 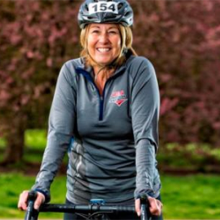 After hip surgery at UK, triathlete pursues her passion without limits

When Patty Lane’s orthopaedic surgeon told her that her time as an endurance athlete was over, she was so upset she didn’t even tell her family. 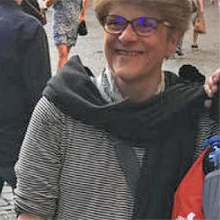 Geri Maschio spent more than a year planning a girls trip to Italy, but pain in her hip threatened to keep her from getting on a plane and experiencing the cities she’d been dreaming about. 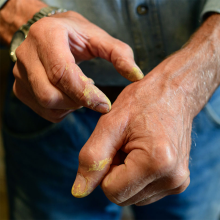 After 50 years as an artist, craftsman and home builder, Lynn Sweet’s hands became more and more painful and he began losing mobility. Not wanting to give up the work he loved and at which he made a living, Lynn sought help from Maureen O’Shaughnessy, MD, an orthopaedic surgeon at the UK HealthCare Hand Center. 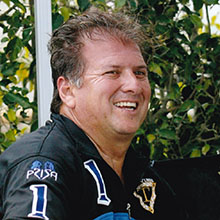 "There's no reason to be in pain."

Omar Trevino’s love of horses has been central to his life—especially as a polo player.

Over the years, he dealt with plenty of minor injuries due to the intense nature of the sport, but a constant, lingering pain in his left shoulder finally got to be too much. At the insistence of his wife, Omar met with Dr. Scott Mair, who diagnosed Omar with a torn rotator cuff and torn bicep. After minimally invasive surgery that allowed for a shorter recovery time, Omar was able to return to the field, pain-free—and he’s playing better than he has in years. 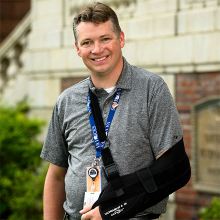 Building a shoulder from scratch

A dull ache was the beginning of a fifteen-year saga for Leonard Preston. Then a 23-year-old Air Force member, Leonard was diagnosed with chondrosarcoma, a form of bone cancer that starts out in the cartilage. By the time they caught it, Leonard’s cancer had eaten through more than half of his humerus. 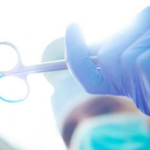 UK orthopaedic trauma surgeon helps patient get back on her feet

Grace Mlachak has an undeniable passion for being active, with hobbies spanning the gamut from water sports to nature hikes. However, when she broke her femur in a wakeboarding accident in late 2008, the healing process did not go quite how anyone expected. Mlachak was left with a leg deformity that slowly worsened her mobility. Learn how a UK HealthCare surgeon helped »

KEEPING PLAYERS AND COACHES
IN THE GAME